Officials say an earthquake has shaken much of North Carolina, rattling homes, buildings and residents. 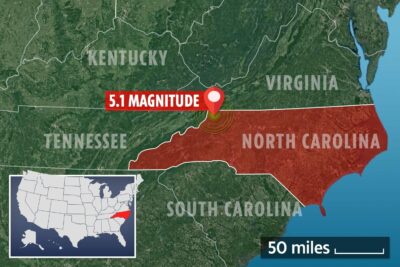 The weather service said it was the largest earthquake to hit the state since 1916, when a magnitude 5.5 quake occurred near Skyland.

There were no immediate reports of damage or injuries.

The U.S. Geological Service said the quake’s epicenter was about 2.5 miles (four kilometres) southeast of Sparta, just south of the Virginia-North Carolina border.

The quake was felt in nearby states including Virginia, South Carolina and Tennessee.