This year’s memorial to those lost in the 911 attacks in the U.S. will be a little different this year. 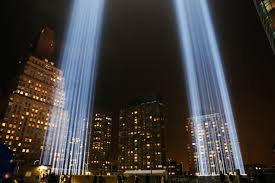 The two ghostly columns of light that rise each September 11th from the area near ground zero in New York, that replicate the shape of the Twin Towers that were destroyed, will not be beamed into the sky this year.

The installation has been canceled because of concerns over the COVID-19 pandemic; one of two significant changes instituted this year by the September 11th Memorial & Museum, which oversees the ceremonies.

Instead of the beams, the anniversary will be marked with buildings across New York City illuminating their spires and facades with blue lights.

A spokesman says the decision was made after concluding the health risks from the virus were too dangerous for the large crew needed to operate the lights.

Families of those killed will still gather at the outdoor memorial in a socially distanced ceremony that will includes the annual recitation of the victims names and six minutes of silence.