The real estate market in the Southern Georgian Bay area has not only come back from a COVID-19 lull, July saw a record breaking number of home sales in that region.

According to the Southern Georgian Bay Association of Realtors, sales in July were nearly 58 percent above sales recorded in July of 2019. 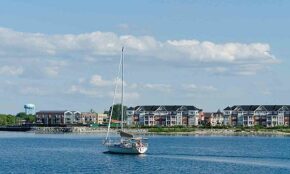 Most of the 594 homes sold in Southern Georgian Bay were in Wasaga Beach, Collingwood, Clearview, The Blue Mountains, Meaford and Grey Highlands, all of which are served as part of Zoomer Radio’s AM 740 listening area, as well as The New Classical FM’s Collingwood signal at 102.9FM.

The boom last month also brought year-to-date totals up to 1219 units, or 6.9 percent higher than in July of 2019. At the start of the pandemic, those year-to-date numbers started to fall behind.

“Sales activity increased dramatically across the Southern Georgian Bay region in July,” said Mike Scholte, president of SGBAR. “This past month had the highest number of home sales since June 2016, setting a new single-month record. New listings increased slightly year over year, posting the largest number added in the month of July in more than five years.”