For the second time this summer, a statue for former Prime Minister Pierre Trudeau has been vandalized in Vaughan. 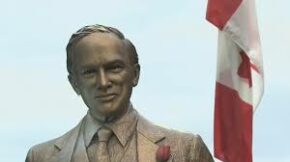 Three sides of the statue’s base were spray-painted with the word “pedo” in white.  White paint was sprayed on the statue itself as well.

Back in June, the statue’s face was spray-painted black.

Vaughan Mayor Maurizio Bevilacqua says he’s disappointed with the vandalism adding the actions do not reflect the values the city stands for.

York Regional Police say they’re aware of the incident, but are offering up no further details.

The graffiti has since been removed.