Toronto’s mayor is using strong language to express his displeasure with what’s seen in a viral video which shows Toronto Raptors President Masai Ujiri being shoved twice by a San Francisco area police officer on the night the Raptors won the NBA championship in Oakland last year. 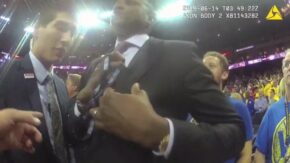 “The whole thing just makes me seriously pissed because Masai Ujiri is such a good and he did not deserve ever and does not deserve to have his reputation impugned in this way and now we have the facts that show this was always the case,” John Tory told CP24.

The mayor says this is evidence that reveals that officer, Alan Strickland, was lying when he said he was assaulted by Masai Ujiri.

“And I said at the time he was incapable of that type of behaviour alleged by this officer, and he blew it up into this entire story of an injury and a workers compensation claim, stuff that’s just unbelievable. And now they now owe Masai Ujiri a complete apology.

Mayor Tory says this also relates to an issue which he and the other members of the Toronto Police Services Board approved on Tuesday.

“This also shows the value of body cams because at the end of the day the camera doesn’t lie and shows exactly what went on there which is directly contrary to what this officer said,” Tory explained.

The use of police body cams is one of dozens of recommendations given the go-ahead to combat anti-black racism in the Toronto Police Service.