One of U.S. President Donald Trump’s most influential and longest-serving advisers, Kellyanne Conway, says she’ll be leaving the White House at the end of the month. 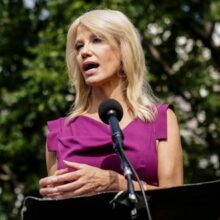 Conway was Trump’s campaign manager during the stretch run of the 2016 race.

She then became a senior counsellor to the president.

Conway’s husband is a longtime critic of Trump. George Conway is also stepping back from his role in a group called the Lincoln Project aimed at defeating Trump in November.

Conway’s daughter has been posting about her parents a lot recently and has become a critic of President Trump.

Claudia Conway is also taking credit for her mother’s decision to step away from Trump.

“Look what I did! Look at what I did, ladies and gentlemen,” Claudia Conway said in a series of TikTok videos posted this evening. “Look at what I did.” The 15-year-old TikToker, who has dubbed herself a “radical agnostic liberal/leftist” has been putting her conservative parents’, and in particular her mother’s, feet to the political fire online all summer over police protests, Black Lives Matter, and any number of Trump policies, only going silent when she was forced to delete her account, though she was back at it again by July 18th.