The NBA Champion Toronto Raptors are still very much alive in their second round playoff series against the Boston Celtics.

Fans have something to be super excited about after OG Anunoby’s buzzer beater and a win in game 3 on Thursday night.

Toronto’s mayor is even back to wearing his trademark Raptors’ jacket.

“If the jacket seems to be helping out along with everybody else’s good luck charms than who am I not to wear it,” John Tory told CP24 Friday morning.

Mayor Tory calls the win, when they were 2 points down with 0.5 of a second left, extraordinary.

It was a thrilling 104-103 victory for the Toronto Raptors over the Boston Celtics. 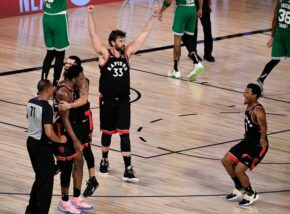 OG Anunoby hit the winning 3 pointer to take the lead a split second before the buzzer.

OG says he wasn’t surprised to see his shot fall.

“I don’t shoot trying to miss, but every time I try to make it,” Anunoby said to reporters after the win.

The Raptors now trail the series two games to one. Game 4 of the best of 7 is Saturday at 630pm.