O'TOOLE TO ADDRESS CAUCUS IN OTTAWA, REMPEL GARNER AMONG THOSE FRONT AND CENTRE IN SHADOW CABINET

Erin O’Toole is set to lay out a mission statement for the federal Conservative party today at his first official caucus meeting since he won the leadership race last month.

He plans to address his MPs in Ottawa by talking about what he calls his Canada First economic strategy, which he says puts the wellness of families and higher wages, rather than GDP growth, at its core. 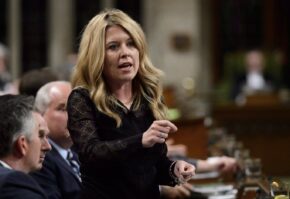 “Putting Andrew Scheer as infrastructure and communities, we mentioned Michelle Rempel Garner (as seen in photo), I think that’s hugely smart. She is extremely pro-choice, a huge women’s rights advocate, so any issues of that will be dispelled by having her as the health critic. Keeping Pierre Poilievre in finance was a no brainer. He was so effective,” Capobianco explained. Listen for Jane’s full conversation with the Tuesday Strategy panel by clicking here.

Wednesday’s speech may also hold clues as to how the Conservative party will handle the potential showdown in Parliament after the minority Trudeau Liberals present a throne speech on September 23rd that will trigger a vote of confidence.