She’s an 83 year old, terminally ill, great-grandmother, who just wanted a chance to sit on a Harley-Davidson motorcycle before she passed away. 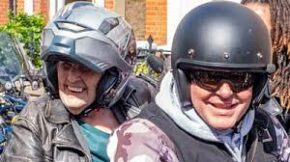 So you can imagine Anne Turner’s surprise when more than 50-bikers showed up at her home in England.  She’d expected one or two.

And while she just wanted to sit on a “hog,” they took her for a ride and daughter Rachel Turner says they knighted her mum with a Hell’s Angels t-shirt and made her an honourary member of the gang.

And with that, Anne Turner crossed off the final item on her bucket list.