ALINE CHRETIEN REMEMBERED AS INFLUENTIAL BEHIND THE SCENES FIGURE

Condolences have flowed to the Chretien family following the death on Saturday of Jean Chretien’s wife Aline.

The former prime minister and Aline Chretien has marked their 63rd wedding anniversary on September 10th, just two days before she died at the age of 84. No cause of death has been given.

Prime Minister Justin Trudeau described her as “a strong mother, and a devoted wife for over 60 years who tirelessly supported one of Canada’s longest serving prime ministers during some of the country’s most pivotal moments. Trudeau went on to say, “we owe a great debt to Aline who championed multiculturalism and bilingualism and helped bring us closer together.” 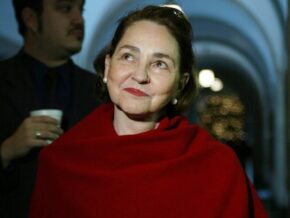 Aline was instrumental in all of Chretien’s seminal political decisions: to stay in the federal arena despite appeals in the 1960s to run for a seat in Quebec’s National Assembly; to quit politics in 1986 after losing the Liberal leadership to John Turner; to return to the fray in 1990; and to go for a third consecutive mandate in 2000.

She even arguably saved Chretien’s life on Nov. 5, 1995, when a jackknife-wielding, mentally unstable intruder broke into the prime minister’s official residence in the middle of the night. After encountering him in the hall outside their bedroom, Aline Chretien slammed and locked the door before calling the RCMP guardhouse and waking her husband, who then famously armed himself with a soapstone carving of a loon.

It was Aline who advised Chretien to recruit academic and future Liberal leader Stephane Dion to his cabinet after Canada’s near-death experience in the 1995 referendum on Quebec independence.

And throughout his 40 years in federal politics, it was Aline who warned him when she thought he was too loud or too aggressive or embarking on what she considered the wrong course of action.

In 1994, Mrs Chretien described herself as Madame Tout le Monde – Mrs. Everybody.

A family spokesperson says a private funeral is being planned for now because of restrictions associated with COVID-19 with a public memorial planned for sometime in the future.