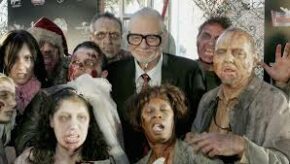 Romero practically invented the genre with his ground breaking film “Night of the Living Dead” in 1968.

Critics say it expands, clarifies and concludes a tale more than 50-years in the making and is in book stores now.

Romero was born in New York, but was married to a Canadian and living in Toronto when he died in July of 2017 at the age of 77.