80TH ANNIVERSARY OF THE BATTLE OF BRITAIN REMEMBERED

Three World War II Spitfires and one Hurricane, flew in a box formation over Westminster Abbey in London Sunday, as they remembered the Battle of Britain. 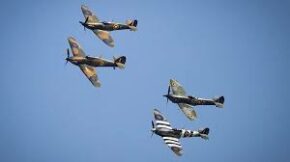 The anniversary is usually held on September 15th; the day in 1940 when 60 German fighters and 26 RAF planes were shot down on what is now known as Battle of Britain Day.
The RAF won the Battle prompting British Prime Minister Winston Churchill to deliver his famous lines, “Never have so many, owed so much, to so few.”
The remembrance was held five days later this year, because of the pandemic.  Usually there are some 2,000 people inside Westminster Abbey for the service.  This year there were only 100, physically distanced, inside.