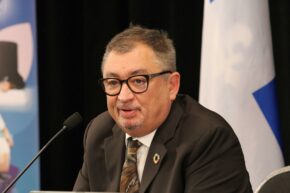 Doctor Horacio Arruda made the declaration Monday as 586 new daily cases were announced.
Three regions in Quebec have been placed on the second highest alert level, including Montreal and Quebec City.
Private gatherings in these areas are now restricted to a maximum of six people. No more than 25 people are allowed to attend public gatherings such as weddings, barbecues or religious services and bars will not be allowed to serve alcohol past 11pm.
Quebec’s rising case load has fueled calls for the provincial government to impose even more drastic restrictions, such as shutting down bars entirely and requiring students to wear masks inside the classroom. Public health experts believe private gatherings are the main source behind the current wave of infections.