In a caper worthy of the world’s best known secret agent, Police in London are after whomever stole five guns, that were used as props in James Bond films. 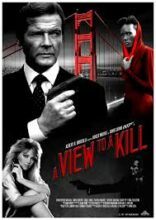 Four of the guns are still missing including the Walther PPK used by Sir Roger Moore, in 1985’s “View to a Kill,” as he pursues Grace Jones up the Eiffel Tower.  One of the de-activated firearms was recovered in a field a few days after the theft, which occurred in March, in a London suburb.
The London Metropolitan Police Department has released new security camera footage showing a vehicle parked near the scene of the crime, apparently on reconnaissance.  One detective said it’s a scene worthy of a 007 movie, “you can see the flash of a camera from the occupant engaged in the surveillance.”
Anyone with any information is asked to come forward.