Plans are afoot to turn the life story of Britain’s Captain Tom Moore into a major movie after two UK film companies bought the rights to his story. 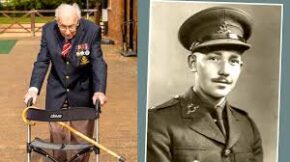 The now 100-year old rose to prominence earlier this year, when he raised the equivalent of $66 million CAD for the UK’s National Health Service, by walking laps of his garden.
He also scored a number one hit with his rendition of “You’ll Never Walk Alone.”
Since then, the former British Army Captain has been made an Honourary Colonel and been Knighted by the Queen.
The only thing yet to be decided is who will play Sir Tom in the film.
He says he likes 87-year old Sir Michael Caine or 82-year old Sir Anthony Hopkins, but adds they’ll have to age up if they want to play a 100-year old.