It wasn’t exactly like the “Tractor Beam” on Star Trek.

On the TV show, the the tractor beam was used by the USS Enterprise crew to push and pull objects outside the ship, to tow ships in need and even push the ship away from danger.
In real life, the “Tractor Beam” or optical tweezers as it’s more properly known, uses the pressure of light in a laser beam to seize and manipulate microscopic objects, from atoms to living cells.
The man credited with turning science fiction into science fact, physicist Arthur Ashkin, has died at the age of 98 at his home in New Jersey. 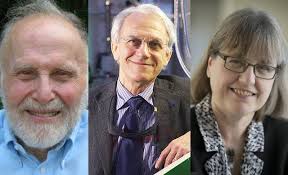 Ashkin (above on the left) was awarded half the 2018 Nobel prize for physics, sharing it with Canada’s Donna Strickland (right) and Gérard Mourou of France (middle).