A NEW LEADER FOR THE GREEN PARTY

Annamie Paul calls her election as leader of the Green Party of Canada ‘an historic moment.’ 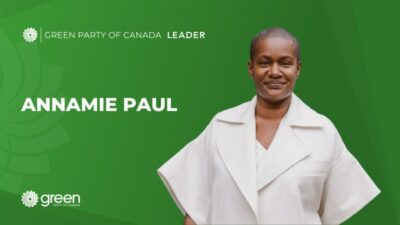 She is the first Black Canadian and first Jewish woman to be elected leader of a major federal party in Canada.

Paul took the microphone in an Ottawa art gallery after her win was announced and declared herself the descendant of slaves and an ally of those, such as Indigenous people, who are fighting for justice.

In her victory speech, she says Canada needs a much more ambitious plan to rebuild the economy in an environmentally conscious way.

She won the support of a bare majority of Green members in eight rounds of balloting.

Paul says the other parties are intellectually exhausted and only the Greens have a good-news story to tell Canadians.