A difference of opinion is becoming more solidified between Toronto’s medical officer of health and the provincial experts who advise Premier Doug Ford on the issue of indoor restaurant dining during the second wave of the pandemic.
Dr. Eileen de Villa continues to insist that indoor dining is contributing to the spread of COVID-19 in Toronto.
She says it’s Toronto specific.
“Yes, we have seen exposures within the context of bars and restaurants, closed indoor settings where you have many people together, gathered in a way where it’s difficult to sometimes physically distance and it’s certainly difficult to wear a mask as the activity involves eating and drinking,” de Villa further explained.
Backing up Dr. de Villa is Fire Chief Matthew Pegg who says more restaurant and bar owners have been charged for violating COVID-19 rules.
“We also responded to twelve complaints relating to restaurants and bars, resulting in three charges being laid,” Pegg detailed, “A further seven complaints related to banquet halls and hookah lounges were investigated. Two of those were not operating, four were found to be in compliance and one warning letter was issued.” 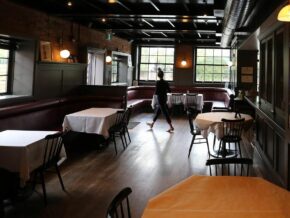 The request for the province to shut down indoor dining in Toronto restaurants to reduce the spread of COVID-19 has so far been denied by the premier.
“I have to see the evidence before I take someone’s livelihood away from them and shut their lives down,” Ford said.
Starting this Thursday, the number of people allowed inside Toronto restaurants will be reduced from 100 to 75, as decided last week by Toronto City Council.