An ensemble of some 400 freelance musicians gathered outside the British Parliament buildings to demand more support for self-employed artists. 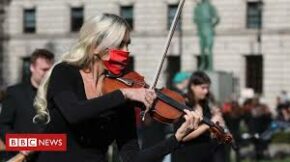 With the help of Scottish Violin virtuoso, Nicola Benedeitti, they performed a short segment of “Mars” from Holst’s “The Planets.”
The event was designed to put pressure on the UK government to give more support to self-employed artists.  It was organized by groups representing some 32,000 UK performers who estimate they’ve lost more than three-quarters of their regular work during the pandemic.
The UK government has created a $2 billion fund for the arts but most of that money was earmarked for museums, galleries and venues, rather than individuals.