PRINCESS OF WALES THEATRE TO REOPEN IN NOVEMBER

When it was shut down in the spring sold out audiences were enjoying “Come From Away” at Toronto’s Princess of Wales Theatre. 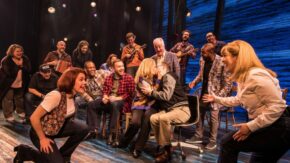 Mrvish plans to reopen the 2,000-seat Princess of Wales Theatre next month to present “Blindness” which has been a hit during the pandemic in England.
In the UK, masked and socially distanced audience members spetd 75 minutes listening to actress Juliet Stevenson perform an adaptation of José Saramago’s dystopian novel about a society afflicted by an epidemic of blindness.
Mirvish is planning to install the show, complete with Stevenson, running it 20 times a week before audiences of no more than 50.
The production company says the show is already permissible under COVID-19 Ontario’s protocols but the reopening is being delayed until a recent uptick in local virus cases eases.
Mirvish says the play will open November 17th.