Mounties have made a second arrest in connection with clashes over Indigenous fishing treaty rights in Nova Scotia. 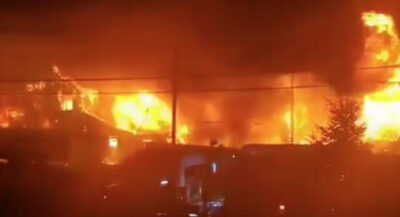 Saturday, police announced they had charged a 46 year old man with assault against a local Indigenous chief.
Police have now charged another man with arson after non-Indigenous fishermen clashed with members of a First Nation outside lobster pounds that store Indigenous-caught lobster.
Nova Scotia Premier Stephen McNeil is urging Ottawa to define what constitutes legal harvesting in a moderate livelihood fishery.
He says once that is defined, his province can examine its own rules for fish buyers.
McNeil says the province is working with Ottawa to find a facilitator to bring the sides together and resolve the dispute through respectful dialogue.
Early Saturday morning, a lobster pound in Middle West Pubnico burned to the ground, destroying the lobster catch of Mi’kmaq fishers.
The fire has been deemed suspicious and a man who is a person of interest remains in a Halifax hospital with life-threatening injuries.
Public Safety Minister Bill Blair is stepping up the RCMP presence in the region in an effort to keep the peace.