MPs in the House of Commons could soon debate how best to resolve a treaty dispute between commercial and Mi’kmaq fishers in Nova Scotia.
Four Liberal cabinet ministers, along with the New Democrats, requested an emergency debate in a letter to the House Speaker Sunday night. 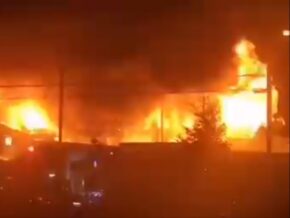 (The non-Indigenous protesters oppose the band’s decision to start a commercial lobster fishing business that has operated outside the federally regulated lobster season since mid-September PHOTO BY PIERRETTE DENTREMONT/TWITTER)
The dispute has devolved into violent acts with every indication it was arson on Saturday, which burned down a lobster pound that stored the catch of indigenous fishers.
Mike Sack is a local first nations chief. He says some of the trouble could’ve been avoided had repeated requests for a greater police presence been addressed more quickly.
He also says there is solidarity on how to move forward among the indigenous people in the area.
There was a show of support for the indigenous fishers Sunday in Halifax, where hundreds of people gathered to demand respect for treaties.
A man considered a person of interest in the lobster pound fire remains in hospital with life threatening injuries.