Kathleen Wynne has announced she will not seek re-election in the next Ontario election campaign.
The former premier says she’s informed her Don Valley West riding association she will not be a candidate in the 2022 provincial election. 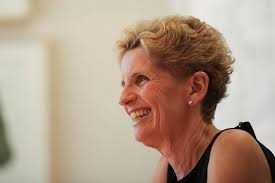 67 year old Wynne and her spouse, Jane Rounthwaite, recently moved to Alliston to live with Wynne’s expectant daughter and her partner.
Wynne explained that her daughter’s going to look after them when they’re older, and in the meantime, they’re going to help with childcare.
But Wynne is still getting in her political digs.
She posted on social media yesterday, “Only the weakest politicians avoid difficult questions. At the heart of our job description is answering tough questions.”
Wynne’s reference is to Ontario’s Long Term Care Minister Merilee Fullerton, who abruptly left a news conference Monday before allowing a reporter to ask a question.
The same reporter recently argued on twitter with Fullerton, after the minister compared COVID-19 deaths in long term care to a bad flu season.