CIVILITY REIGNED OVER SECOND AND FINAL U.S. PRESIDENTIAL DEBATE BETWEEN TRUMP AND BIDEN

It was a far more civil event than the first U.S. presidential debate. 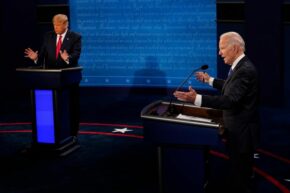 Donald Trump and his democratic challenger Joe Biden both refrained from interrupting each other, even as they clashed on six main issues, with the handling of COVID-19 a primary focus.
“This is the same fellow who told you this is going to end by Easter, this is the same fellow that told you, don’t worry, we’re going to end this by the summer,” Biden said to the camera, “We’re about to go into a dark winter and he has no clear plan and there’s no prospect that there’s going to be a vaccine available for the majority of the American people before the middle of next year.
“I don’t think we’re going to have a dark winter at all,” Trump responded, “We’re opening up our country. We’ve learned and studied and understand the disease, which we didn’t at the beginning.”
Trump also  insisted there would be a COVID-19 vaccine in a matter of weeks.
Trump, in particular, was on his best behaviour early, especially with the moderator Kristen Welker, who kept the debate much more in check than Chris Wallace did in the candidates’ first encounter.
The only black moderator in this year’s election cycle, Welker tried to get the candidates to address issues like police brutality and systematic racism. But when they were asked to speak directly to black voters, neither seemed able to make the kind of direct response the questions demanded.
But Biden did challenge Trump over deepening racial divisions.
“Abraham Lincoln here is one of the most racist presidents we’ve had in modern history,” jabbed Biden, “He pours fuel on every single racist fire.”
“You made a reference to Abraham Lincoln,” countered Trump, “Where did that come in? I said, not since Abraham Lincoln has anybody done what I’ve done for the black community. I didn’t say, I’m Abraham Lincoln.”
Trump also declared himself the least racist person in the room.
Biden argued that Trump has been an incompetent leader of a country facing multiple crises.
But the democratic challenger also tried to set the record straight on his son Hunter Biden’s involvement in Ukraine.
“We had this whole question of whether or not, because he was on the board, I later learned, of Burisma, that somehow I had done something wrong. Yet every single solitary person when he was going through his impeachment (referring to Trump), testifying under oath who worked for him, said I did my job impeccably. I carried out U.S. policy. Not one single solitary thing was out of line.”
Biden went on to accuse Trump of trying to bribe the Ukrainian government – the focus of impeachment proceedings against Trump – to say something negative about Biden, which Biden claimed they would not do because there was nothing to say.
While advance voting continues, the U.S. presidential election is Tuesday November 3rd.