There are now reports of seven dead and several injured after a terrorist attack in Vienna, Austria that took place in several locations but apparently targeted a synagogue that was closed when gunfire erupted.
Some of the terrorists are believed to be among the dead.
The situation is still developing and there are reports of shots at a Hilton hotel and a hostage taking at a restaurant.
Vienna police are this hour urging people to stay clear from all public places and transportation after gunfire erupted in that city. A massive police presence is reported. 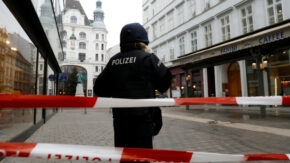 This comes just days after a weekend sword attack that left two people dead and another five people injured.
Quebec City Mayor Regis Labeaume is calling for a wider societal debate on mental health and describes it as the biggest security issue facing Canada’s major cities in the coming years.
Police say a Montreal man dressed in a medieval costume used a sword to randomly attack strangers over the course of two-and-a-half hours Saturday night.