With the Ford PCs under growing pressure to protect long term care residents during the second wave of COVID-19, a government announcement is expected today on increasing direct care in Ontario’s nursing homes. 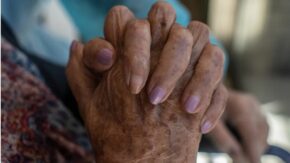 A pledge to provide an average of four hours of daily direct care for each nursing home resident in this province will reportedly be announced today. But we’re also learning from an unnamed senior government source this pledge won’t be achieved until 2024-2025 at the earliest.
Other details on long term care are expected in the provincial budget this Thursday with a long term care staffing plan to be released next month. This staffing plan would see tens of thousands of more personal support workers and nurses hired in the coming years.
Long Term Care Minister Merilee Fullerton continues to receive the brunt of criticism over the lack of a plan to protect long term care residents during a second wave of the virus, with Opposition NDP Leader Andrea Horwath calling for her resignation.
During Question Period last week, Dr. Fullerton defended her record.
“I am the minister who cares so deeply about long term care that I have come after many years of serving the public, caring everyday about patients and families and doing my very best to serve them and now I’m here serving Ontarians,” Fullerton declared.
As of November 1st, 1955 long term care residents have died in Ontario nursing homes after contracting COVID-19, the vast majority of those during the first wave.
At the beginning of September, there were just 5 nursing homes in outbreak. Now, there are seventy-four.