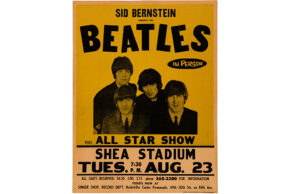 A poster from the Beatles 1966 concert at Shea Stadium in New York is expected to go for at least $100,000 dollars at a Heritage Auction November 14th.
The poster was spotted on an apartment wall when a man named Anthony Bruno posted a picture of himself on social media dressed for Halloween as “Austin Powers.”
Bruno took the poster home after the concert and it’s hung on his wall all this time.
It turns out, the poster is extremely rare, one of just six or seven still known to exist.
Another copy sold for a record of more than $137,000 when it went to auction this past April.