Two men and two women have died from their shooting injuries in a terror attack in the heart of the Austrian capital Monday evening.
Seventeen others have been injured, with seven of these people said to be in life-threatening condition. 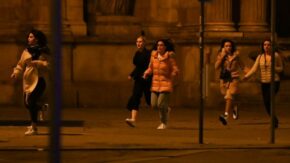 A suspected attacker has been shot and killed by police. He’s been identified as a 20 year old Austrian-North Macedonian dual national who had a previous terror connection.
Investigators say the assailant was sentenced to 22 months in prison in April 2019 because he had tried to travel to Syria to join the Islamic State Terror Group. He was granted early release in December under juvenile law.
Authorities are still trying to determine whether other attackers may be on the run.
People in Vienna have been urged to stay at home if possible and children did not have to attend school on Tuesday.
Some 1000 police officers were on duty in Vienna Tuesday morning.