Amid soaring demand across Canada, the federal Public Health Agency is trying to secure more doses of flu vaccine. Canadians have been urged from  all levels of government to get a flu shot this year so hospitals aren’t overwhelmed with flu patients, in addition to COVID-19 cases. But the vaccine is not usually produced after October and additional doses will have to come from countries that have extra supply.
The agency, which orders flu shots for the provinces based, increased this year’s order by almost 25 percent to 13.9 million doses. Prime Minister Justin Trudeau said earlier this week the government will ensure there will be enough flu vaccine for everyone. 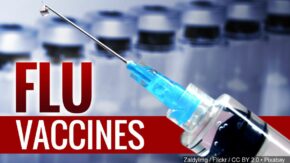 In Ontario, 90 percent of the 5.4 million doses of the vaccine have already been distributed and the health minister says plans are being made to order more. Rexall Pharmacies announced it was cancelling appointments for the flu shot due to lack of supply but appointments are still being taken at some doctors’ offices and public health clinics including Toronto Public Health. Ontario pharmacies receive 20 percent of the province’s overall supply.