The Ford government’s spending its way out of the COVID-19 induced recession. Finance Minister Rod Phillips has tabled a record $187-billion dollar budget to fight the pandemic that does not lay out a path to balance, with the government saying that will come in the 2021 budget. The province will also have a record deficit of $38.5 billion. 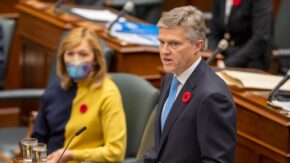 The budget includes no new tax increases though there are breaks for seniors. A tax credit aimed at helping seniors stay at home longer will reimburse them for 25 per cent on eligible renovations of up to $10,000 regardless of their income and whether they owe taxes for 2021.
But Bill  VanGorder, Interim Chief Policy Officer with the Zoomer advocacy group CARP says while stair lifts and ramps are helpful and should be supported, but that’s not the solution to keeping people out of large warehousing long term care facilities.
“Solving the problem of people being able to stay in their homes, as they want to, means having healthcare to the home and in the community close by and available so they don’t have to go into long term care,” VanGorder told Zoomer Radio news.
The budget does not include any costing for the new long term care standards announced earlier this week, that would mandate nursing home residents receive an average of four hours of direct care per day. That’s a problem for Bill VanGorder. 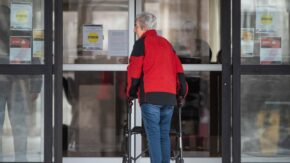 “If there’s no money in the budget, it won’t happen as the budget is the business plan for the upcoming year and we don’t see anything in the business plan that says this is going to happen,” says VanGorder.
Also in the fiscal blueprint, a break for 200,000 businesses. Their education tax rate is being reduced by about one-third which should save them $450M per year. That means a small employer could save 44-thousand annually.
Opposition Leader Andrea Horwarth says the government is merely waving a white flag in the battle against COVID-19.
“He’s telling seniors in dangerously understaffed long term care homes that more staff won’t be coming this year, you’re on your own,” Horwath told reporters.
Liberal Leader Steven Del Duca calls the budget a betrayal of everyone from seniors to students saying Doug Ford is chearing Ontario because he’s not helping the most vulnerable.