Just two days before Remembrance Day, Premier Doug Ford has announced $500M for the Helmets to Hardhats program helping veterans transition into a career in the trades. 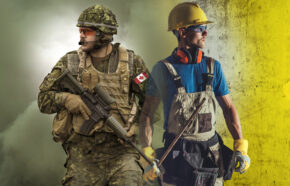 “This is a program that helps out veterans transition to civilian live and find new careers and to date, this organization has helped over 1,000 veterans find a second career in the construction industry,” said Ford.
Since the national program started in 2012, more than 40 percent of the 1,000 hired found work in Ontario. Amid the pandemic, Doug Ford says demand is high for construction workers.
Meantime, on the COVID front, the Premier says there’s a spike in infections around the world and adds he’d think differently IF it was just Ontario experiencing the surge.
Ford says he respects what Peel Region is doing by imposing further restrictions and says Toronto can do the same as the city is set to enter a reduced level of restrictions this weekend.
Later, Mayor John Tory told reporters he’s deeply concerned about the record number of new COVID infections in Toronto at 483 Monday, and hints that like Peel Region, an enhanced suite of measures is likely needed here and will have more to say Tuesday.
“We cannot just accept the numbers or say we were told they would increase this way, we have to fight them now before they dramatically increase again and put us in a deep and deadly hole,” said Tory.
The city was poised to ease current restrictions this coming weekend.