STRICTER COVID-19 RESTRICTIONS IN EFFECT IN PEEL, MAYOR TORY DOES NOT RULE OUT SAME FOR TORONTO

New COVID-19 related restrictions go into effect today in Peel Region, where there was a record number of daily case at 385 on Sunday.
Under Premier Doug Ford’s new colour-coded tiered system of restrictions, Peel is the only area of Ontario classified as red, meaning indoor capacity at local restaurants, gyms and fitness centres is capped at 10 people.
Further to this, Peel’s Medical Officer of Health Dr. Lawrence Loh says new restrictions as of Monday November 9th, include closing any meeting and event spaces or halls, seating at the same table in restaurants and bars is restricted to people from the same household, and pre-registration is required at gyms and fitness centres.
And as of Friday November 13th, social gatherings celebrating holidays and life events including wedding receptions will not be allowed in Peel Region. 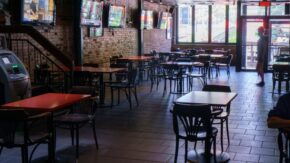 What about Toronto? The City of Toronto is set to enter the orange zone of restrictions on Saturday November 14th.
But Mayor John Tory said on Monday, that may change.
“Peel’s numbers on a per capita basis are worse, but do we want to go where they’re going?” Tory asked on CP24, “For example you’ve seen the strain put on their hospitals where they we’re pretty much full up, the emergency rooms don’t have room for people and so on. And one of the objectives throughout has not only been to save lives and keep people healthy, but to protect the healthcare system. So we’re doing what we would responsibly do and we’ve been doing it over the weekend, and we’ll be doing it again today which is to take a look at what is in place in the city of Toronto, take a look at the numbers which are not heading in the right direction.”
Both York Region and Ottawa were moved to the orange zone on Saturday, allowing 50 people inside restaurants and fitness facilities and 4 to a table inside restaurants and bars.
Indoor dining, gyms and movie theatres are currently closed in Toronto.