Premier Doug Ford calls reports that his government ignored medical recommendations when creating the new colour-coded COVID framework “totally inaccurate”.
“I’m a little disappointed on that note, but that’s one doctor’s perspective that sits on the disease prevention table and at the end of the day, I stood here when we put this out with Doctor Williams, we went along with the framework and he approved the framework,” Ford told reporters.
Despite this, Public Health Ontario has said it stands by the comments of its chief health protection officer, Doctor Shelley Deeks, that she was never consulted.
In addition, the agency describes the framework as insufficient to contain the spread of the virus putting the health care system and its most vulnerable citizens at risk.
Some health experts criticize the new plan as too lax as cases spike. Ford admits the document can be confusing but says it can be changed. 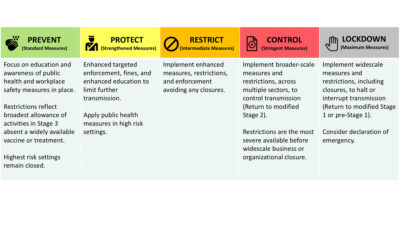 Meantime, Ford was asked about the possibility of Prime Minister Justin Trudeau invoking federal emergency powers like travel bans to curb the spread of COVID-19, as recommended by some top epidemiologists.
“That wouldn’t go over too well not just with me but with all 12 other premiers, that’s not their jurisdiction, we don’t need the nanny state telling us what to do, we understand our province’s and I’ll tell you, he’d have a kick back like he’s never seen,” a defiant Ford told reporters.