We are learning the governing Progressive Conservatives at Queen’s Park rejected the advice of experts in their own public health agency when they created a new colour-coded framework for COVID-19 restrictions.
Health Minister Christine Elliott told reporters on Friday, the framework was designed after full consultation and advice from two expert advisory groups – the public health measures table and the modelling consensus table, as well as Chief Medical Officer of Health Dr. David Williams.
But a Toronto Star report says one group was never consulted and a member of the other group, Doctor Shelley Deeks, says she never saw the final plan before it was released.
In addition, the experts who spoke with the Star, describe the framework’s controls as insufficient to contain the spread of the virus, putting Ontario’s health care system and its most vulnerable citizens at risk. 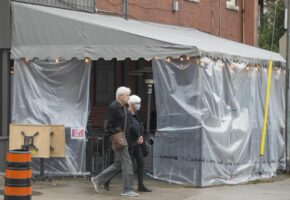 Under the province’s plan, Toronto is set to enter the Red Control level on Saturday. But the city’s chief medical officer of health has invoked her legal authority to go beyond the restrictions and keep indoor dining, movie theatres, and casinos closed, citing the city’s surging case counts and test positivity.
As recently as Wednesday, Premier Doug Ford said he is in support of Toronto’s decision to invoke greater restrictions.
“What our framework does, it creates a baseline. And I’ve always said, no one knows their area better than the local medical officer of health, the local mayor, local MPs and MPPs and councillors. We’re going to take a targeted approach moving forward,” Ford defended.
Peel Region is also in the Red Control level but not with as many restrictions as what Toronto will be under starting Saturday.
COVID-19 hot spots York Region and Ottawa are in the orange zone of restrictions.