You may have seen them already.
Traffic agents are now patrolling Toronto’s busiest intersections. 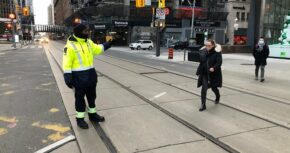