Ontario is reporting another single-day high of 1,589 new COVID cases; 525 in Peel and 336 in Toronto as both regions begin a 28-day lockdown to curb the spread of the virus.

Despite a plea from small businesses in Toronto and Peel to open with limited capacity during the lockdown, the Ford government is not bending. 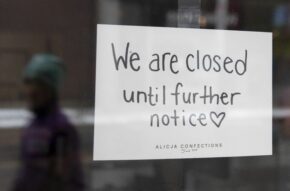 Doug Ford says it would be a logistical nightmare to make big box retailers cordon off non-essential sections as they are currently doing in Manitoba and critics say that’s unfair.

And there appears to be some confusion about why Hudson’s Bay on Queen Street is open during the lock down. The Premier says he’s not sure why it’s open.

“We aren’t able to identify at least a third of cases where people acquired the virus so that’s evidence of widespread community transmission,” according to Dr. Yaffe.