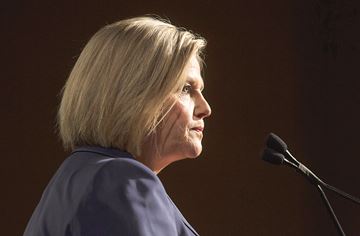 Ontario’s NDP got an early Christmas gift in the form of a recent poll that bumps them to 26 percent support from voters, enough to form the official opposition.That same Forum research poll shows the Kathleen Wynn liberals headed toward a third place finish. In her year-end news conference on the last day of this sitting of the legislature, NDP leader Andrea Horwath took a parting shot at the liberals …noting that the party’s popular policies — pharmacare and hiking the minimum wage— are all NDP ideas. And yesterday, Andrea Horwath called on the provincial government to launch a full-scale inquiry into problems that plague the long-term care system. In a letter to the health minister , the NDP leader renewed her demand for a broad public inquiry. The house resumes on February 20th, and with an election just six months away, can the NDP creep even higher in the polls? And in this world of “Trump Politics” how will our politicians reach out to voters who are growing increasingly weary of our leaders, a fact borne out in that same Forum Research poll. Andrea Horwath led the New Democrats into both the 2011 and 2014 campaigns.