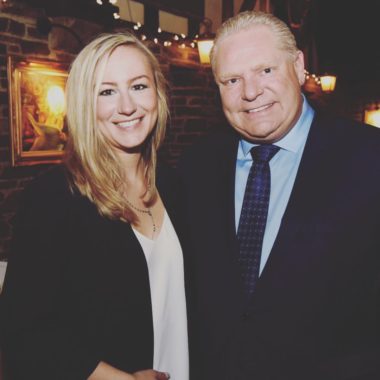 With just two weeks to go until the Ontario election, the Liberals are accused PC Leader Doug Ford of helping to sell bogus memberships for Etobicoke Centre PC Candidate Kinga Surma. Liberal campaign co-chair Deb Matthews leveled the accusations at a news conference where she played a recording earlier today. The Liberals say it has been tested for its voracity and is said to be from a Tim Hortons in Etobicoke Centre where Ford and Surma were signing up PC party members in October of 2016. People who were at the Tim Hortons store were told in two separate exchanges that they don’t have to pay for the $ 10 dollar memberships, and that the fee will be covered. Matthews also released a communique from one of Surma’s rivals for the nomination that says Ford tried to “intimidate her” on more than one occasion, and in one instance followed her home. Matthews says it paints a picture of a man lurking around corners in a black SUV and trying to scare a woman. Conservative strategist John Capobianco and NDP commentator Tom Parkin weigh in on this latest scandal.