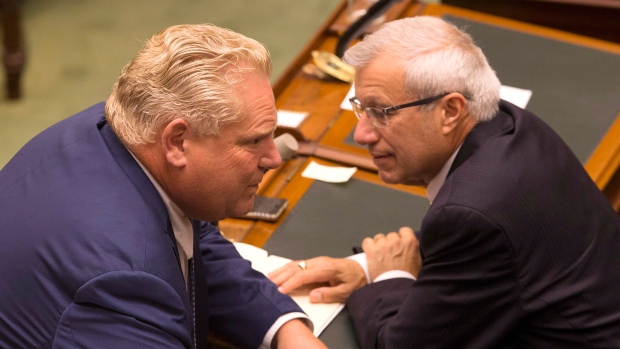 It was a promise made by Premier Doug Ford during the provincial election campaign. Now it appears Ford will be keeping a promise to ensure that Ontario workers earning less than $30,000 dollars a year will no longer have to pay provincial income tax beginning next year. Reports say this will be announced later on today when Finance Minister Vic Fedeli delivers the province’s fall economic statement. Those Ontarians who earn up to $38,000 dollars a year will pay less tax. However, currently there are some low income workers who use a combination of rebates and other measures and are already spared provincial income tax. Those who will be newly exempt are expected to save roughly $850 dollars a year, or $1,200 and $50 dollars for households with two exempt workers. The Ford PCs have previously announced plans to scrap a $15 dollar an hour minimum wage hike, which the former Wynne Liberals had put in place for this coming January 1st. Libby speaks with her panel of experts: Bob Richardson, Liberal Strategist and Senior Counsel to National Public Relations, Political Strategist Gerry Nicholls and Conservative Strategist Mike Van Soelen at Navigator Limited to get their views.