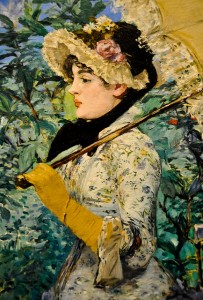 We now know who paid $65 million for a famous masterpiece by Edouard Manet.

The J. Paul Getty Museum in Los Angeles says it has acquired the Manet artwork “Spring,” – a celebrated portrait of a Parisian actress – as an embodiment of the season.

“Spring” was sold last night at Christie’s in New York.

The $65 million price tag is almost double the previous record of $33.2 million for the 19th century French artist.

The Director of the Getty, Timothy Potts,  says the painting from 1881 is one of Manet’s great masterpieces – and he predicts it will become one of the museum’s most iconic images.

The Getty says the painting is in exceptionally fine condition after being in the hands of one family – for more than a century.