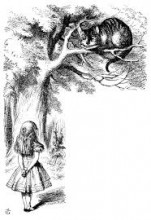 Alice is journeying to America.

Lewis Carroll’s handwritten, illustrated manuscript for “Alice in Wonderland” will travel to the U.S. – to mark its 150th anniversary, next year.

The British Library is loaning the book to New York’s Morgan Library and Museum and to a museum in Philadelphia – the Rosenbach Museum of the Free Library of Philadelphia.

It bears its original title of “Alice’s Adventures Under Ground.”

The book’s illustrations were done by Dodgson himself. The handwritten manuscript bore the dedication “A Christmas gift to a dear child in memory of a summer’s day.”

The book was purchased by an American dealer in 1928 – and returned to Britain twenty years later.