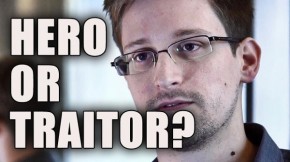 It was Snowden’s first ever video appearance before a high school audience and he used  the opportunity in part to explain why he blew the whistle.  Snowden says he watched as the National Security Agency in the U.S. went from monitoring bad guys and terrorists to monitoring entire populations, societies and nations.  Snowden’s appearance was part of Upper Canada College’s World Affairs Conference.  The video feed originated in Russia, where he has asylum from American prosecution.