MANET EXPECTED TO GO FOR UP TO $30 MILLION 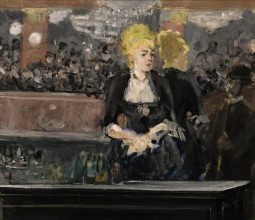 One of the defining images of French impressionism is up for sale this month as Sotheby’s auctions Edouard Manet’s “Le Bar aux Folies-Bergere.”  The painting will be offered up June 24th in London, with an estimated price of between $23 and $30million.  The 1881 oil painting of a barmaid at the famous Parisian cabaret has been featured in numerous exhibitions, including the recent “Inventing Impressionism” show at Britain’s National Gallery.  Prices for high-end artworks have soared in recent years as wealthy buyers from Russia, China and the Middle East flex their financial muscles.  Last month Sotheby’s sold “Nympheas,” one of Claude Monet’s iconic water lily paintings, for $54 million. And last month rival auctioneer Christie’s sold Picasso’s “Women of Algiers for $179.4 million, the highest sum ever paid for an artwork at auction.