Despite a media-fuelled controversy swirling around her visit to India’s Golden Temple yesterday, Premier Kathleen Wynne was honoured by Sikh leaders. 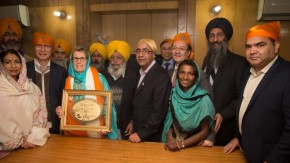 She was presented with the siropa, an orange cotton robe, in a private ceremony at the end of the tour. One of India’s major newspapers, The Hindustan Times, reported before her visit to the holy shrine, that Premier Wynne would not be welcomed by the Shiromani Gurdwara Parbandhak Committee with a siropa because she’s a supporter of same sex marriages.

The openly gay premier is travelling with her spouse, Jane Rounthwaite. Kathleen Wynne is also accompanied by a delegation of 81 people from the provincial government, businesses and post-secondary institutions.

The mission has been designed to deepen relationships between Ontario and the world’s fourth-largest economy.