She’s been named the first Canadian winner of the American Plutarch Award for Biography. 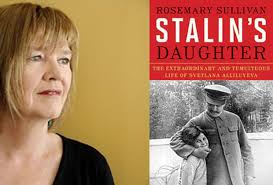 Sullivan is being honoured for her book Stalin’s Daughter; The Extraordinary and Tumultuous Life of Svetlana Alliluyeva  (HarperCollins Publishers).

The author has already won several awards for the biography, including the $25,000 RBC Taylor Prize, the $40,000 British Columbia National Award for Canadian Non-Fiction and the $60,000 Hilary Weston Writers’ Trust Prize for Nonfiction.

The Plutarch Award is named after the famous biographer of ancient Greece – and the winner is determined by secret ballot – from a list of nominees selected by a committee of distinguished members of the craft.