Thousands of people gathered this weekend at the Canadian National Vimy Memorial in France to mark the 100th anniversary of the battle. Prime Minister Justin Trudeau and other dignitaries spoke at the two-hour event. 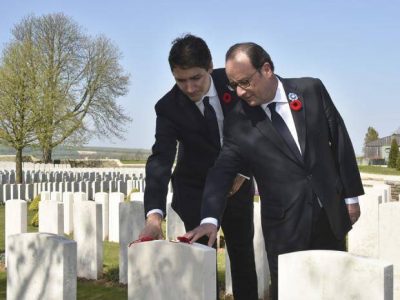 Earlier in the day, hundreds of citizens from this French city of Arras turned out in a heartfelt display of thanks to Canada and the thousands of Canadian soldiers who fought and died at nearby Vimy Ridge exactly a century ago. Vimy Ridge will long be remembered as the moment Canada came into its own as a military force. By the time the fighting ended on April 12th, 1917 more than 3,500 Canadians had died in the fighting and another 7,000 were wounded. Four members of the Canadian corps were awarded the Victoria Cross – the highest military decoration given to British and Commonwealth soldiers. In Toronto, commemorative events were held at the historic Fort York including re-enactments and a military parade.