Faculty at 24 Ontario colleges are now on strike, after representatives with their union and the college could not resolve their differences ahead of the Monday 12:01am strike deadline. 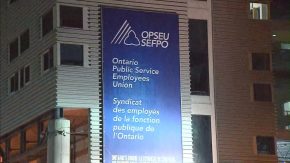 The strike affects more than 500,000 students, but OPSEU bargaining team member Nicole Zwiers is hopeful it will be a short walkout.

“We remain optimistic that we can engage in talks again with the employer, but of course we need both sides at the table and both sides willing to work toward some sort of settlement, so I remain hopeful that will happen,” Zwiers explained.

There is no indication when talks might resume. But College Employer Council Spokesperson Sonia Del Missier says the union demand calling for the number of full time faculty to match the number of contract faculty is the big stumbling block.

“The additional costs in the additional full time staff makes up part of that $250-million, but as well that ratio also creates other problems in terms of not being able to staff programs appropriately,” stated Del Missier.

The strike involves more than 12,000 professors, instructors, counsellors and librarians.