FRED TURNER RETIRING FROM THE ROAD 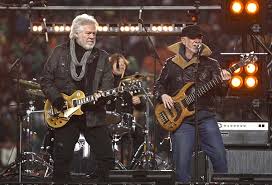 Bachman made the announcement on social media over the weekend saying he’s grateful for the years he and his 74-year old bass player have had together and for the joyful music they created.

The band produced such classics as “Takin’ Care of Business” and “You Ain’t Seen Nothing Yet” and played some of the world’s biggest venues.

Bachman and Turner were inducted into the Canadian Music and Broadcast Industry Hall of Fame in 2011.