Sting and his wife Trudie Styler have been honoured with honourary doctorates at the Ivy League Brown University on Rhode Island. 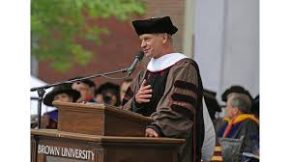 Sting and Styler co-founded the Rainforest Fund in 1989. The charitable organization now helps protect millions of acres of forest in country’s around the globe.

Sting told the graduates he’s been inspired by the American dream.

“Because the American dream is not exclusively American. The whole world looks to you for leadership,” Sting told the crowd.

After receiving an honourary degree, Sting belted out the American ballad My One and Only Love as the students cheered and clapped.