A Washington vote on a U.S. immigration overhaul bill has been pushed into next week.

The bill includes $25-billion for U.S. President Donald Trump’s border wall, and a path to citizenship for young, undocumented immigrants who have lived in the U-S since childhood.

Trump tweeted that “unlike the Republicans, the Democrats don’t care about security.”

The U.S. President has also weighed in on Twitter about the writing on the back of Melania Trump’s jacket, which was the focus of a social media storm on Thursday. 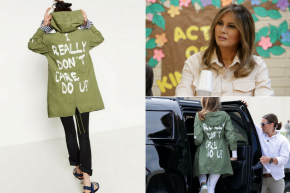 Upon boarding a flight to a Texas facility housing migrant children separated from their parents, the first lady was wearing a green hooded military jacket with the words “I really don’t care, do u?” written graffiti-style on the back.

Trump tweeted that “I really don’t care do you refers to the Fake News Media.” He continued, “Melania has learned how dishonest they are and she truly no longer cares.”

On Wednesday, President Trump reversed a policy separating migrant children from their parents who cross over to the U.S. illegally.